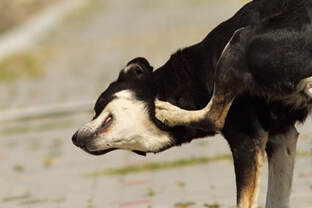 Making a difference for dogs with atopic dermatitis:
When to use Apoquel and when to use Cytopoint
New dermatology drugs give veterinarians and pet owners great new options for managing pruritus, but navigating the best use of each one can be tricky. Here’s a guide to using two newcomers effectively.


By Lindsay McKay, DVM, DACVD
DVM360 MAGAZINE
Jul 13, 2017
​
As every general-practice veterinarian knows, dermatology disorders are one of the main reasons clients bring their dogs in to the clinic. Moreover, itchiness (i.e., pruritus) is often their chief complaint. While the causes of pruritus are many and varied, the majority are due to a hypersensitivity disorder, with canine atopic dermatitis being among the most common of these diseases.

Making the diagnosis
Before we delve into a discussion of managing canine atopic dermatitis, let’s first look at how to make the diagnosis. In my veterinary dermatology practice I use a four-step approach in my allergy workup that focuses on ruling out other causes of pruritus.
1. Rule out parasites. Unfortunately, our physical exam findings and tests such as skin scrapings and flea combings are not adequate to rule in or rule out parasites such as fleas or scabies. The best method is to employ treatment trials for these types of parasites.
2. Identify infection. The next step involves performing skin and ear cytologies to identify secondary bacterial and yeast infections. Managing these infections often involves the use of both oral and topical antimicrobial therapies.
3. Consider food allergies. The third step is a diet elimination trial to assess for food allergies.
4. Make the diagnosis. Our final step is to make the diagnosis of canine atopic dermatitis if we still have a pruritic dog that’s relatively free of lesions.
Residual lesions at the end of these four steps would lead me to consider additional testing such as skin culture and sensitivity testing to assess for resistant bacterial skin infection or skin biopsy to look for non-allergic disease. Ultimately the diagnosis of canine atopic dermatitis is a diagnosis of exclusion once we’ve ruled out these other causes of pruritus.

Examining new treatment options
The current theory for the pathogenesis of canine atopic dermatitis is that pro-inflammatory cytokines derived from activated lymphocytes and other inflammatory cells lead to neuronal itch stimulation, inflammation and disruption of the skin barrier, which triggers an itch cycle causing pruritus, inflammatory skin lesions and further defects in skin barrier function.1 This greater understanding of the pathophysiology of canine atopic dermatitis has led to the development of therapies that can better target pruritus mechanisms and control clinical signs in dogs with the condition.
Apoquel (oclacitinib) received FDA approval in June 2013 and, more recently, Cytopoint received USDA approval in December of 2016 (both products are manufactured by Zoetis). So we now have two new therapies to help manage the clinical signs of atopic dermatitis in our canine patients. But success in these cases will be greatly improved if veterinarians also (1) emphasize topical therapy to help restore the skin barrier and (2) treat and work to prevent bacterial and yeast skin and ear infections. Treatment of canine atopic dermatitis will always be multimodal as dictated by its complex pathogenesis, but we’re getting closer to finding tailored treatment options that can help provide an excellent quality of life for our clients and their dogs with canine atopic dermatitis.
Apoquel is a selective janus kinase (JAK) inhibitor with activity against JAK-1- and JAK-3-dependent cytokines. It has both antipruritic and anti-inflammatory properties, which reduces levels of pro-inflammatory cytokines interleukin (IL)-2, IL-4, IL-6 and IL-13, as well as inhibiting activity of IL-31, known as the pruritogenic (or itch-producing) cytokine.
Apoquel is labeled for the control of pruritus associated with allergic dermatitis and the control of atopic dermatitis in dogs at least 12 months of age. The dosing guidelines recommend that Apoquel be given twice daily for up to 14 days and then once daily going forward. Its antipruritic effects are rapid, with demonstrated reduction of pruritus within 24 hours.2 Apoquel is generally well-tolerated with mild gastrointestinal upset the most commonly reported side effect.2 In addition, there are no reported drug interactions, so it can be given with many other commonly used medications such as NSAIDs, vaccinations, antibiotics or antifungals. Lastly, Apoquel does not interfere with diagnostic testing, so it can be used without affecting thyroid levels or intradermal allergy testing.
Cytopoint is a monoclonal antibody therapy that binds canine IL-31 to rapidly reduce the itch associated with canine atopic dermatitis. Cytopoint was developed via a genetic engineering process known as “caninization” where the protein was made less immunogenic but still maintains highly specific binding for canine IL-31. It binds IL-31, the pruritogenic cytokine, in the extracellular space so that it cannot bind its cytokine receptor on neurons in the skin and transmit the sensation of pruritus.
Cytopoint is labeled for aid in the reduction of clinical signs associated with atopic dermatitis in dogs. It’s a subcutaneous injection administered at the veterinary clinic. Cytopoint reduces pruritus within 24 hours and delivers four to eight weeks of itch relief in most patients.3 While Cytopoint rapidly reduces itch, the return of clinical signs is gradual, allowing the veterinarian to repeat dosing as determined by the return of pruritus.
Cytopoint can be used in dogs of all ages, including those less than 12 months of age. It can also be used in dogs with comorbidities, and, like Apoquel, it does not have any known drug interactions. Also like Apoquel, Cytopoint does not interfere with any diagnostic testing, so it can be used concurrently with various types of diagnostic testing or laboratory monitoring. The most commonly reported side effects in Zoetis’ field safety study was gastrointestinal upset, and that was similar to levels seen in the placebo-treated dogs.4,5 Cytopoint requires refrigeration, and injections are best tolerated by dogs when the dose for injection is allowed to warm to room temperature.

So which treatment is best?
As a veterinary dermatologist, I was fortunate to be involved in the clinical trials that led to the approval of both Apoquel and Cytopoint, and I’ve seen the benefits of these new medications for controlling the signs of canine atopic dermatitis in my patients over the last several years. With any new therapy, we as veterinarians must determine the best indications for its use and what role it plays in the discussions we have with our clients, as they rely on our recommendations for therapy choice for their pets. I would like to share the guidelines I use when discussing these therapies with owners of patients with canine atopic dermatitis.
I think both Apoquel and Cytopoint are great options for dogs with seasonal environmental allergies where the symptoms last for only a few months per year. Apoquel can be started at the first onset of clinical signs, given twice daily for up to 14 days until the pruritus is controlled and then used daily for the duration of the allergy season. Cytopoint can be used in a similar manner. The client brings the patient in at the onset of the allergy symptoms for their first treatment and then Cytopoint injections can be repeated every four to eight weeks as needed.
Both Apoquel and Cytopoint can effectively be used in this manner because their onset of action is rapid—they both reduce itching within 24 hours. Thus, with only a few months of oral medication or a few injections, a pet with short-season atopy will be well-controlled for the duration of its symptoms.
Apoquel and Cytopoint can both be equally beneficial as an adjunctive treatment for managing refractory canine atopic dermatitis. I consider a patient’s canine atopic dermatitis to be refractory if it’s only partially controlled by a therapy for environmental allergies such as allergen-specific immunotherapy. Apoquel or Cytopoint can be used short-term to bridge the gap in a pet’s allergy control if it requires additional therapy for only a few months per year. However, in my most severe patients with atopic dermatitis, I am able to use allergen-specific immunotherapy along with Apoquel or Cytopoint (and in some cases both Apoquel and Cytopoint) year-round as the patient’s needs demand.
When Apoquel is best. Apoquel is my choice for providing short-term itch relief during an allergy workup. As I identify and treat secondary skin or ear infections, perform treatment trials to assess for fleas or mites, or initiate diet trials to assess for food allergies, I still need to provide immediate itch relief in my patients so they’re comfortable while I determine the primary cause of their pruritus. Apoquel can be used in all these instances since it’s labeled for the control of pruritus associated with any allergic disorder, including flea allergy dermatitis, scabies or food allergies, as well as canine atopic dermatitis.
Apoquel is also my first choice in a canine atopic dermatitis patient with both significant inflammation and pruritus. Apoquel inhibits both pro-inflammatory cytokines (IL 2, -4, -6 and -13) and the pruritogenic cytokine (IL-31), so it’s better suited for dogs with severe clinical signs. Lastly, as an oral medication, Apoquel may be a good fit for clients who object to return visits to the veterinary clinic for repeat injections of a medication like Cytopoint or who value the convenience of giving a daily oral medication at home.
When Cytopoint is best. On the other hand, there are certain cases where Cytopoint is better for managing canine atopic dermatitis. It’s a great choice for patients less than 1 year of age as it’s labeled for dogs of any age (Apoquel is labeled for dogs over 12 months old). Cytopoint also has very flexible dosing and can be used in even the tiniest of dogs. I also find that Cytopoint is well-tolerated in atopic dogs with a history of medication side effects (such as polyuria and polydipsia associated with corticosteroids or lethargy with antihistamines). Cytopoint’s ease of administration as an in-office injection greatly improves compliance in atopic patients, making it an excellent option for dogs with atopy that are difficult to medicate or for clients who need the convenience of a monthly treatment.
I’ve also found that certain clients are drawn to Cytopoint as a non-drug alternative therapy when they learn that Cytopoint uses a novel monoclonal antibody therapy to precisely target the itch of canine atopic dermatitis without possible effects on the immune system or other organ systems. Cytopoint offers an advantage in some atopic patients that also have serious infections such as systemic fungal disease or neoplasia. Cytopoint does not interfere with immune surveillance, is unlikely to add to medication side effects such as gastrointestinal upset, and does not have any known drug interactions; therefore it can be used alongside treatments for any concurrent medical issue.

In conclusion
For our patients with canine atopic dermatitis, we need to work to create a treatment plan that’s personalized to the individual needs of the pet and client. Therapy plans should manage all aspects of allergies: itch, inflammation, secondary infections and the skin barrier. The itch of environmental allergies is often the most distressing aspect of this disease for pet and client. With both Apoquel and Cytopoint, we have targeted precision therapies that can be used to “switch off the itch,” thereby improving both the pet and client’s quality of life and their human-animal bond. Understanding the pathophysiology of canine atopic dermatitis has now brought cutting-edge medicine to the management of canine atopic dermatitis and given us two new tools to help manage this complex disease.
HOME | ABOUT US | SERVICES | VIRTUAL TOUR | NEWS AND RESOURCES | CONTACT US | EMERGENCY